Have you ever tried to buy a planner in April?  It’s impossible.  (Apparently, I managed to buy an academic calendar, which only went from August 2009 to April 2010..)   As I’m completely hopeless without one, I bought a blank notebook to fill out with months, weeks, etc.  And of course, I just couldn’t leave it alone; the blank, blue cover was too boring!

It was a bit nerve-wracking at first, especially since I really didn’t want to screw up my first Moleskine notebook…  (At least it was on sale!)

1- Design the general outline in Gimp/Photoshop/Paint.  I suggest starting with an image that is the size of your notebook and don’t bother making every line for every stitch, just enough to get the placement right.

2- Print and cut out the image.  Using tape, stick it to the cover of your notebook.  (Plastic notebook covers are best!)

3- Using your pointiest needle, poke every hole for each stitch.  They don’t need to be huge holes, just enough to get through the cover.  Open the notebook to the first page and lay the cover on a roll of toilet tissue to keep the needle from going through all the pages.  (It’s also comfortable to grip the roll between your thighs.)

4- Embroider just as you would normally!  Don’t worry about tying knots though, you can secure the ends with a dot of glue when you’re finished.

That’s really all there is to it! 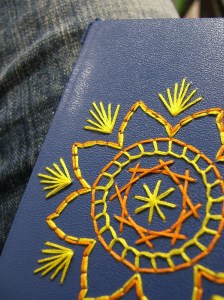 The stitches I used, from the center: straight stitch, an altered herringbone/cross-stitch, buttonhole stitch, back stitch, two more rows of back stitch, straight stitch radiating from a single point.  (Sorry, I don’t embroider nearly enough to know real names, but if you have any questions, I’ll be sure to answer them!)

Soooo….  what do you think?

Posted in Archived and tagged Archived